Excerpts from "Moncton Markets: Lessons From the Past," Dimensions Newsletter, January 1984. 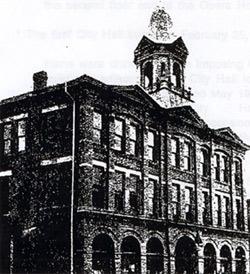 More than 100 years ago, on January 2, 1884, the Council Committee on Market Buildings tabled its plans for the towns first market. Tenders were called on their plans and the lowest bidder was awarded a contract for $20,000. Neither the architectural profession nor the community had any input, so it is not surprising that six months later, Council instructed the Committee to procure architectural plans and specifications from Mr. Fairweather, a well-known New Brunswick architect.

Council also instructed the Committee to hold a special meeting of town citizens to obtain their input. That special meeting of the Electors of the Town was held, instructing Council to build a brick market house about 160 by 60 feet on the site, at a cost not to exceed $20,000. The first tender had at least given everyone a figure to work with. Council instructed the town clerk to prepare a bill as authorized by the meeting of the electors to allow the Town of Moncton to borrow this money. The Market Committee was told to look for a suitable site and ascertain land costs.

Suitable land was offered for sale by J. and C. Harris on Main Street. The lot was 88 by 290 feet, and obtainable for $3,850. Moncton purchased the land and Council "resolved that Mr. Fairweather be requested to furnish plans and specifications for a market building 60 x 150 with brick, with Town Hall over the rear end of the market 60 x 110, with a dual entrance off Main Street, the whole not to exceed $21,000. There is no explanation as to the extra thousand dollars authorized by the electors.

The complex now was titled "City Building" showing that the town was actively looking at City status, which it did not acquire until 1890. Tenders were called; Peters and Leblanc were awarded contract on their lowest bid of $16,995 with the stipulation that the market was to be completed by December 1, 1884 and the rest of the complex by May 1, 1885.

The new market was not ready by December 1 as stipulated in the contract, and the contractors refused to allow its use. There must have been friction, for the penalty fixed in the contract was exacted, and four days later, the Market Committee took forcible possession, opening Moncton's first market on December 6, 1884. Subsequently, the complex was completed, and in addition to the market, contained an opera house upstairs, Town Hall behind and an embryo library. The market operated daily with a butcher's market, fish market, and general stalls to sell fresh meats, fish, poultry, wild fowl, country produce, fruit, and vegetables. Licenses to operate a stall were $20 in 1890 - not a modest sum - in addition to which tolls were exacted averaging from two to five cents per hundred weight of produce and fish, four cents per carcass of meat, and one cent per pair of fowl.

The city building bell served as the fire brigade's fire alarm. However, it did not ring on February 25, 1914, the day the entire complex was destroyed by fire.

City Council met temporarily in the YWCA following the disaster, and the market continued to operate in temporary quarters. Winter's store was rented for $75/month and in the spring of 1915 the market moved to the Marven Building on West Market Street for $40/monthly rent. One assumed that the temporary quarters handled a vastly greater array of produce and goods, but nevertheless operated in similar circumstances as the present market behind Recreation, Parks and Culture.

Council quickly took up the matter of new quarters and a possible new location, purchasing land on East Market Street for a total of $14,150. Once again input was expected from the citizens and the question of location was a matter to be settled by ballot. No less than an Act of the Assembly of the Province of New Brunswick was passed to assume this democratic process look place by plebiscite. Every person duly qualified to vote at an election of Mayor and Aldermen was allowed to vote, and the plebiscite was to be conducted "as near as may be in the same manner as votes are taken at an annual election of Mayor and Aldermen for the City of Moncton under the provisions of Chapter 60 of the Acts of Assembly of the Province of New Brunswick." Given two choices, the taxpaying population merely struck out the site they did not want on August 3, 1914, voting 591 to 282 in favour of the old market site.

Four days later, the Market Committee reported that, owing to war conditions, it would be impossible to sell City Bonds to build the new complex, and the matter was put off "until some future time." The following February, $75,000 in bonds for a new city building were included as part of a city bond issue of $178,000. A committee from the Trades and Labour Council had been in large part responsible for going ahead with the bond issue. The total was to be divided with $50,000 for the new city building and $25,000 for a new market building, both in the same complex.

Albert Sincennes was engaged as architect on June 17, 1915 at a price not to exceed $3,000. Tenders were called on his plans, six were received, and the unfortunate contract was awarded in September to the lowest bid by Tilman LeBlanc for $62,740, or which $24,490 was for market construction. Within nine months the construction costs of the incomplete complex soared to $70,622.51, with a loss of $5,942.87 to the contractor. Leblanc's services did not figure in this amount and he was working gratis. Council refused to award the difference, citing the contract, and the Market Committee resigned. The city auditor and city engineer were instructed to go over the contractor's bills, and Council passed a motion to pay both the outstanding wages to the men, as well as the outstanding railway freight bills on materials.

A special committee was set up to study the city auditor's findings, and reported that costs for the complex were now $73,000, $10,000 over contract. That figure was exclusive of any salaries for the contractor himself. The situation was rapidly becoming a very heated issue. Council finally issued a release from the 11-month-old contract with Leblanc that had become disastrous for him. The City also became responsible for Leblanc's contracted debts. The city engineer was authorized to proceed with completion of the complex, and the second city market finally opened, moving into the complex during the week of November 12, 1916.

The Market operated without interruption until the complex was destroyed in 1971, this time by demolition. Tolls over the 35 years during which the second market operated averaged 3% - about five cents on 10 lbs of onions and tomatoes or a bushel of parsnips and beets. Fruit, vegetables, meat, poultry, fish and seafood, dairy products, flour and meal, livestock, hay, grain, skins, yarns, woolens, and dry goods all made their way into Moncton homes.

Interest by some local farmers saw the revival of the market in the rear of the old Community Services building on Robinson Street in 1979. In addition to the market, the building housed a boxing club and theatre. Eventually, these buildings were cleared to make way for the construction of the market that is used today.

In 1995, today's market was completed, starting first with what is now known as Con Simon Memorial Hall and later the adjacent bay area and Festival Hall.

Lorem Ipsum is simply dummy text of the printing and typesetting industry. Lorem Ipsum has been the industry's standard dummy text ever since the 1500s, when an unknown printer took a galley of type and scrambled it to make a type specimen book. It has survived not only five centuries, but also the leap into electronic typesetting, remaining essentially unchanged. It was popularised in the 1960s with the release of Letraset sheets containing Lorem Ipsum passages, and more recently with desktop publishing software like Aldus PageMaker including versions of Lorem Ipsum.

Lorem Ipsum is simply dummy text of the printing and typesetting industry. Lorem Ipsum has been the industry's standard dummy text ever since the 1500s, when an unknown printer took a galley of type and scrambled it to make a type specimen book. It has survived not only five centuries, but also the leap into electronic typesetting, remaining essentially unchanged. It was popularised in the 1960s with the release of Letraset sheets containing Lorem Ipsum passages, and more recently with desktop publishing software like Aldus PageMaker including versions of Lorem Ipsum.


vendor since :
location within the market: